The Power Of Identifying Yourself. 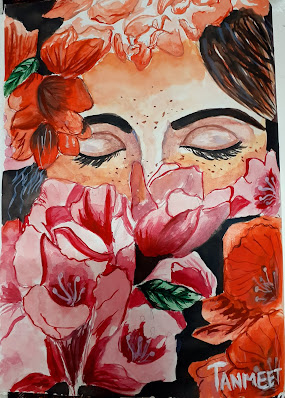 Down the ages the human race has carried a very complex mindset. Gifted with many traits and characters which are often difficult to identify. We all know about our dislikes and likes clearly but eventually makes us confused sometimes. The day you come to know yourself better , faster the things will grasp your way. So it all depends how you explore the globe. It’s very easy to give a long lecture  on someone's behaviour and traits . But before that one must know him/her self better.

There are multiple moods lying over our head which often ends up in a mood swing. Our disposition is broadly divided into three categories which are Extrovert , Ambivert and Introvert. It depends upon your nature and the power that you hold which fits you best in one of these.  People usually think it's better  taking a Psychological test as an easy way to know their hidden character. But that may not be one hundred percent accurate involving only certain questions or a short quiz; it's nothing but giving a false hope.

Carl Gustav Jung  a Psychologist based in Switzerland coined the term Extrovert and introvert in 1920. In which he said Extroverts gather energy through extensive contact from outside whereas Introverts retain their phys-chic energy inside. In addition to this another psychologist Hans Eysenck in 1960  made his point in Carl's' theory that reserved  Introverts have high level of mental energy resulting in better brain function  on other hand Extroverts end up in poor functioning of brain with less neuron activity due to excessively enhancing their energy socially.

According to my opinion one must know his / her traits for better understanding. Whether a person is ambivert , extrovert or introvert it doesn't make any difference. People think that being an introvert is obsolete having no contact with the outer world . But studies have shown that introverts are  highly logical in thinking and use deep process thoughts when applying ideas in the work arena in comparison to extroverts who  use a quick and fastest way of approach. Introverts are not antisocial but often need to recharge their batteries when conversation becomes complex and exhausting. They prefer going somewhere in parks where peace or complete isolation is involved. Harmonising themselves through self belief and regaining their energy through inner soul . Extroverts quickly adapt their surrounding aura maximising their vitality by  engaging themselves in colloquy. They are people who need to lay a little stress on  their brain functioning due to less logical adaptability and  lack of deep thought process. But the source of regaining their zeal are people.

People  who lie in between them are ambiverts who quickly change themselves accordingly and also don't forget when  laying out their point  through self belief  highlighting the introverted side. Ambiverts are human characters  with the funniest and shy side .They know  how to balance socially and internally . Extroverts don't usually mix and match with introverts . They easily put  faith on people and lack in self-believe doubting their worth ending up in losing themselves. They don't really know who they are . Whereas Introverts know how to motivate themselves on their own. These people easily don't put people on their plates rather first need some time to acclimatise with the aerosphere . At last Ambivert who is in the middle of these holds up both  the qualities.

Many Researchers and  studies found  that people are not exactly either Extrovert , Introvert or Ambivert but rather choose their idiosyncrasy by observing things around them and how they experience it decides their identity. Things would have been on the next level when people start admiring their original hidden traits inside rather embedding something superficial. What do you think?

at September 06, 2020
Email ThisBlogThis!Share to TwitterShare to FacebookShare to Pinterest